It’s Our Turn to Light a Lot of Candles
<

“A candle loses nothing by lighting another candle.”   Italian proverb

I absolutely love this quote.  Helping someone else does not diminish me!  Deep in my soul, I feel a connection to that person’s success.  Whether they remember or are even aware I helped them, I celebrate their accomplishments.  Generosity of spirit connects us as we help one another.

Another of my favorite quotes has been incorrectly attributed to many bad ass women.  It was actually from Madeline Albright, former US Secretary of State and seriously bad ass person.  In her keynote speech delivered at the “Celebrating Inspiration” luncheon with the WNBA’s All-Decade Team in 2006, she said, “There is a special place in hell for women who don’t help other women.”  High five, Madam Secretary!  Most of the critics of my contemporaries and me were men. But there were plenty of women who belittled our goals, thus earning their own special place in hell.

As a graduate of an all-female high school in the 1970’s, my classmates and I had splendid dreams for college and careers.  We had few role models to untangle the rules of the road for us, especially in traditionally male-dominated fields like medicine, pharmacy, law, engineering, IT, sales, etc.  Still, we were all sure we’d eventually work at an entrepreneurial, senior or C-suite level.  Many of us were hired only because we were women – we helped fulfill a quota.  Welcomed was not what we felt from many of our male, and female, co-workers and bosses.  The examples below may seem archaic to some of you, but were prevalent well into the 1980’s…and beyond:

Who helped you when you dove into the business world?  Was it your mom?  Your aunts? Your sisters?  Your girlfriends?  I hope so, because that is FANTASTIC!  If you have been working for a lot of years, I’ll bet that question gets a big fat “NO!” for an answer.  There were very few moms, aunts, sisters or girlfriends who understood how to navigate traditionally male fields in the 1970’s, much less any who could help us.  My mom worked as a secretary in the late 1930’s through the 1940’s, until she got married.  I heard her tell her sisters, friends and even my dad, she was sure I would work until I came to my senses and got married!  My aunts never learned to drive a car or got a credit card, let alone had careers.  A few of my mom’s friends worked, but only because they divorced or were widowed and had to work to live.  Luckily for me, my dad who had no sons, believed in sharing his workplace savvy.  He was generous with college and career advice for his two daughters.

We must pledge to empower women and coach them for phenomenal success.  Let’s be as generous as we wanted women AND men to be to us when we were young and unsure of how to navigate the workplace.  Let’s be the role models women need as mentors and teach them how to be a road warrior.

Let’s use our brightly blazing candles to illuminate a path for others to light up the world with their own brilliance.

It’s our turn to light a lot of candles. 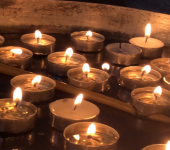